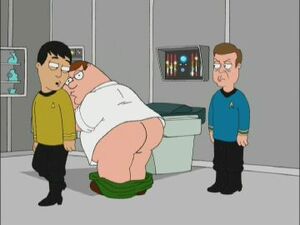 He is part of the away team consisting of Captain James T. Kirk, Mr. Spock, and Ensign Ricky in "I Never Met the Dead Man".

He refuses to help Peter Griffin with his prostate problem because he is afraid to be sued after Peter's lawsuit against Dr. Hartman in "Stewie Loves Lois".

He was also present in Stewie Griffin's idea of Rupert's funeral in "Road to Rupert".

Retrieved from "https://familyguy.fandom.com/wiki/Dr._McCoy?oldid=118139"
Community content is available under CC-BY-SA unless otherwise noted.