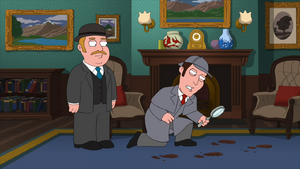 John H. Watson, known as Dr. Watson, is a character in the Sherlock Holmes stories by Sir Arthur Conan Doyle. Watson is Sherlock Holmes' friend, assistant and often narrator of the stories.

Dr. Watson appears in "Secondhand Spoke" after Chris sets up a cutaway after noting that he and Stewie work perfectly together like Sherlock Holmes and Watson.

In the cutaway, Holmes notes that red clay at the scene of the investigation came from a gay bathhouse. When Watson remarks on his knowledge, Holmes looks uncomfortable and passes it off as something gained from books and "stuff."

Brian assumes the role of Dr. Watson in "V is for Mystery".

Watson is voiced by Cary Elwes.

Retrieved from "https://familyguy.fandom.com/wiki/Dr._Watson?oldid=208448"
Community content is available under CC-BY-SA unless otherwise noted.