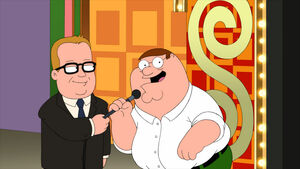 Drew Allison Carey (born May 23, 1958) is an actor, comedian, and game show host. He is best known for being the star of his self-titled sitcom The Drew Carey Show and the host of the improvisational comedy hit Whose Line is It Anyway? He is currently the host of the popular game show The Price is Right, replacing Bob Barker.

Carey guest stars as himself, hosting The Price is Right in "New Kidney in Town". He continues the "tradition" that the host of The Price is Right provides his own voice. Barker, his predecessor, did so each time his likeness appeared.

He appears in "The New Adventures of Old Tom", all of the models on The Price is Right have been replaced with males.

Retrieved from "https://familyguy.fandom.com/wiki/Drew_Carey?oldid=186680"
Community content is available under CC-BY-SA unless otherwise noted.