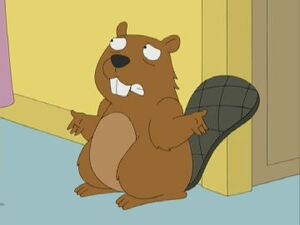 The Dumb Beaver is a Family Guy character who was indirectly victimized by one of Stewie Griffin's insults. While trying to guess who Peter won a round of golf with via an old raffle ticket in "The Juice Is Loose", Lois makes an incorrect guess and Stewie calls her a 'Dumb Beaver'. The scene cuts to a none-too-bright beaver. The beaver makes a few more cameos, retreating when O.J. Simpson shows up.

In "Brian the Closer", he makes a joke about Brian helping with building a dam after he gets new teeth following a fight with Peter. Peter acknowledges the beaver's occasional contributions to the show.

After digging a tunnel to escape being grounded by Lois in "Undergrounded", Peter and the guys bump into the dumb beaver when the tunnel collapses around them.

The Beaver is voiced by writer and producer Alec Sulkin.

Retrieved from "https://familyguy.fandom.com/wiki/Dumb_Beaver?oldid=219463"
Community content is available under CC-BY-SA unless otherwise noted.