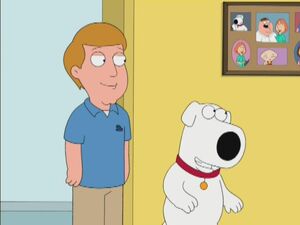 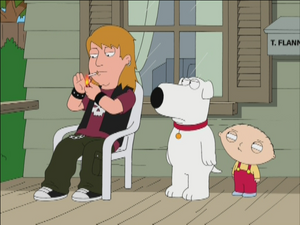 Dylan Flannigan is the son of Brian and Tracy Flannigan, introduced in "The Former Life of Brian". Brian left Tracy before Dylan was born, leaving him not knowing what it's like to have a father. When he visits Tracy, she had become a fat slob. Tracy told Brian and Stewie about Dylan when they went to visit her. Brian goes back to the house and tells Peter and Lois about him. Tracy soon drops Dylan off at Brian's so father and son could bond. At first, he was disrespectful towards Brian and his family. When he is introduced to Chris, the Evil Monkey comes out of the closet, only to have Dylan brutally beat him. When Brian decided he was finally going to give up, one of them dropped a bag of pot. They both called out for it. While smoking the pot they realized they had a lot in common and became close. Brian soon became very protective of Dylan.

Brian was very tired of Dylan's bad attitude, so he turned him into a nicer person. Peter, sick of Brian's overemotional reactions to the slightest things, convinced Tracy to take Dylan back. Even though Brian was against it, Dylan said he must go because he can change his mom's life the same way Brian changed his.

Glenn Quagmire pointed out to Brian during his rant in "Jerome Is the New Black" that he is not a part of his son's life.

Dylan returns in "Brian's a Bad Father" as a star in a new Disney Channel show Parent Boppers. Although Brian is at first reluctant to visit with him, when he discovers Dylan has achieved television success, he quickly rushes to Dylan and asks him to use his contacts to help him secure a gig as a writer on the show. However, Brian soon alienates the other members of the production team and encourages the young stars to alter their own dialog in an overly-dramatic fashion. Brian is fired from the show and his begging for Dylan to intervene makes him realize that Brian only cares about his connections, rather than himself. When Brian finally realizes what he has done, and tries to apologize, he finds himself barred from the studio. Stewie comes to his aid by dressing up as super-cool teen Zac Sawyer, and after landing a place on the show, delivers a message of parental love and Dylan and Brian reconcile.

Stewie mentions Brian's abandonment of Dylan in "Quagmire's Mom" and Stewie alludes to Brian's poor parenting in "Stewie Is Enceinte", offering him a second chance at fatherhood.

Peter brings up that Brian's son was an actor in "The Peanut Butter Kid" and attends Brian's wedding in "Married...With Cancer".

When Brian tries to give parenting advice to Ida in "Bri-Da", she asks how his own son is doing.

In "Boy's Best Friend", Brian admits he has tried to have a better relationship with Kyle because of his failure with Dylan.

Dylan is voiced by Seth Green.

Retrieved from "https://familyguy.fandom.com/wiki/Dylan_Flannigan?oldid=230178"
Community content is available under CC-BY-SA unless otherwise noted.