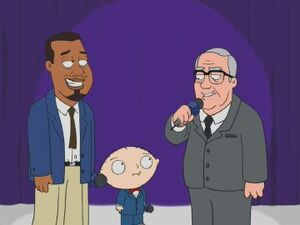 Ed McMahon (March 6, 1923 – June 23, 2009) was a noted television personality. He was best known for being Johnny Carson's sidekick and announcer on The Tonight Show with Johnny Carson on NBC as well as the host of Star Search.

In the alternate timeline in "Meet the Quagmires", Chevy Chase is the host of The Tonight Show, and McMahon is still his sidekick. In this universe, universal health care was approved for the United States. Brian also stated that the average lifespan for a U.S. citizen is longer.

He appeared in "Death Has a Shadow" with Dick Clark on TV's Bloopers and Practical Jokes. He also appeared as himself in "When You Wish Upon a Weinstein" with Sinbad.

Chris tries to imitate Ed in "The Simpsons Guy".

Retrieved from "https://familyguy.fandom.com/wiki/Ed_McMahon?oldid=180447"
Community content is available under CC-BY-SA unless otherwise noted.