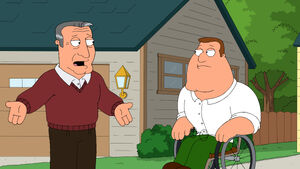 Edward Leonard "Ed" O'Neill (born April 12, 1946) is an American actor, known originally for Married... with Children, he has since become known for his performance on Modern Family.

A caricature of Ed's character Jay Pritchett appears in "The Simpsons Guy" when the cast of Modern Family meets the cast of All in the Family.

Ed provides the voice of Bud Swanson in "Papa Has A Rollin' Son".

Retrieved from "https://familyguy.fandom.com/wiki/Ed_O%27Neill?oldid=180728"
Community content is available under CC-BY-SA unless otherwise noted.