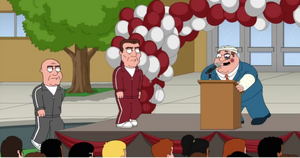 Following a meeting in which he agrees with Brian to rename the high school in honor of the late Mayor Adam West, his secretary informs him that Eddie has arrived. He tries to slip out a window but is caught and beat up outside.

During the renaming ceremony, they appear again but Principal Shepherd is able to escape using his 'Principal coffee breath power' to form both a camouflage cloud, as well as a flying surfboard to escape.

Retrieved from "https://familyguy.fandom.com/wiki/Eddie_Payups?oldid=213312"
Community content is available under CC-BY-SA unless otherwise noted.