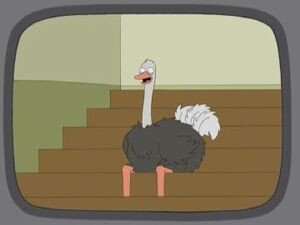 Eddie, the Live Studio Ostrich is a talking ostrich. In "Ocean's Three and a Half", Two and a Half Men is filmed in front of him as the sole audience member. The same ostrich gets the last laugh at the end of the episode.

He appears on Jabba the Hutt's sail barge in It's A Trap!.

He appears in the audience in "Inside Family Guy".

When Peter's sperm donation offspring all share a laugh at the word "semen" in "A House Full of Peters", the ostrich joins in. A separate flock of ostriches, who identify the first as "Eddie", share a similar laugh at his expense for being over at the wrong house.

Eddie provides the laugh track for Chris' Sheldon Cooper in "Emmy-Winning Episode" and gets a chuckle out of Jesus' joke in "Follow the Money".

Eddie and Fouad swap bodies in "Switch the Flip". Eddie also has a crowd scene cameo in "No Giggity, No Doubt".

Retrieved from "https://familyguy.fandom.com/wiki/Eddie_the_Live_Studio_Ostrich?oldid=213424"
Community content is available under CC-BY-SA unless otherwise noted.