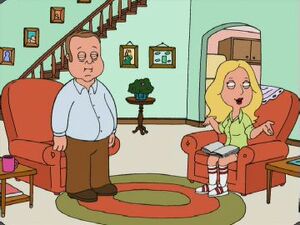 Eight Is Enough is an American television comedy-drama series which ran on ABC from March 15, 1977 until August 29, 1981. The show was modeled after syndicated newspaper columnist Thomas Braden, a real-life father with eight children, who wrote a book with the same name. The show is centered around a Sacramento, California family with eight children (from oldest to youngest: David, Mary, Joanie, Susan, Nancy, Elizabeth, Tommy, and Nicholas). The father Tom Bradford (Dick Van Patten) was a newspaper columnist for the fictional Sacramento Register.

The show was parodied in "Brian: Portrait of a Dog" with Thomas beating Joanie until stopped by Mary while the Griffins watch in horror.

Retrieved from "https://familyguy.fandom.com/wiki/Eight_is_Enough?oldid=149737"
Community content is available under CC-BY-SA unless otherwise noted.