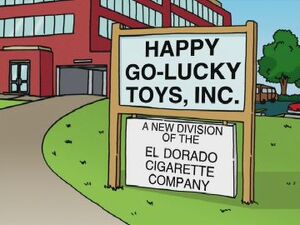 The El Dorado Cigarette Company was a cigarette company that briefly took over the Happy-Go-Lucky Toy Factory in "Mr. Griffin Goes to Washington". The company is very malicious and greedy. According to Brian Griffin, they turned an entire generation of people into smokers with subliminal messaging.

Brian tries to purchase El Dorado cigarettes in "Brian: Portrait of a Dog"

Using toys, they attempted to promote underage smoking, swaying the Griffin family to their side and sending Peter Griffin to Washington to convince Congress. Though they nearly succeed, Peter comes to his senses and turns against them, and Congress fines El Dorado Cigarettes $100 million, leaving them bankrupt.

Retrieved from "https://familyguy.fandom.com/wiki/El_Dorado_Cigarette_Company?oldid=163257"
Community content is available under CC-BY-SA unless otherwise noted.