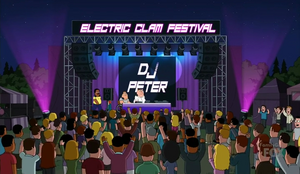 The Electric Clam Festival is where Peter is booked to become a DJ after he and the guys become successful music mixers in "Peter's Def Jam".

After the guys act become a success, the club owner encourages Peter to branch out on his own at the Electric Clam Festival, but his dumping of the guys doesn't go over well. When waking up after an extra-loud rehearsal, he finds he is deaf. He turns to the guys for help, but is rebuffed at first, but after they reconsider, they agrees to stick by his side and help them. But without being able to hear the sound selection, Peter runs an audio book and they blow the gig.

Retrieved from "https://familyguy.fandom.com/wiki/Electric_Clam_Festival?oldid=192740"
Community content is available under CC-BY-SA unless otherwise noted.