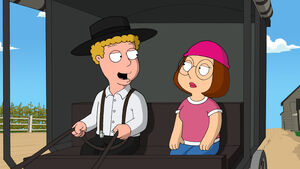 Eli is an Amish boy who falls in love with Meg in "Amish Guy".

When the Griffin's car breaks down in Amish country, while staying at an inn, Meg meets Eli and falls in love. However, Eli's father Ezekiel does not approve of Meg and sends her away. After Meg goes crying to her father, Peter tries to win over Ezekiel and almost succeeds until he decides to show him about rock music.

Back at the inn, the Griffins are confronted with an angry mob of Amish demanding they leave and supply the car with a team of horses to speed them on their way, unaware that Eli has stowed away with Meg. Back at home, the family hears a disturbance and discovers their house has been vandalized. Eli explains the Griffins are now involved in a feud with the Amish. Peter calls up Joe and Quagmire and they set off to Amish country to settle the dispute through fighting. Joe and Quagmire are quickly taken out and Peter finds himself unable to make headway. Peter calls out Ezekiel to single combat but Meg and Eli intervene before they can fight. They manage to talk some sense into the two fathers but Eli realizes he can't live with Meg and bids her goodbye.

He is voiced by Seth Green.

Retrieved from "https://familyguy.fandom.com/wiki/Eli?oldid=218234"
Community content is available under CC-BY-SA unless otherwise noted.