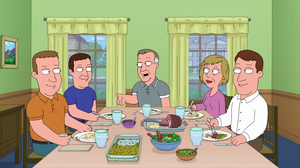 Elisha Nelson "Eli" Manning (born January 3, 1981) was an American football quarterback for the New York Giants of the National Football League (NFL) until his retirement in 2020. He is the son of former NFL quarterback Archie Manning and the younger brother of Denver Broncos quarterback Peyton Manning.

Eli Manning appears in "Save the Clam" when Meg uses the example of the Mannings as siblings that stick together.

When he hopes for a peaceful death at a factory that makes protein shakes from dogs in "The Woof of Wall Street", Brian sees Michael Vick enter the processing room, followed by Eli Manning, who notes that he is a real idiot psychopath, as a subtitle appears and notes that it really isn't true, but the episode was written by New England Patriots fans.

Retrieved from "https://familyguy.fandom.com/wiki/Eli_Manning?oldid=218346"
Community content is available under CC-BY-SA unless otherwise noted.