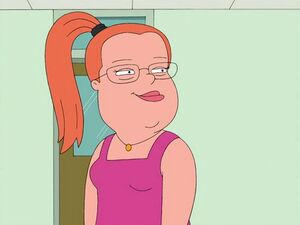 Ellen is the girl that Chris Griffin dated in "Extra Large Medium".

When Chris and Stewie got lost in the forest, the two started sharing things that they would accomplish if they make it out alive, and Chris confessed that he liked a girl named Ellen in his math class, and if they survive, he would ask her out.

Later, when they return to civilization, Stewie supports and encourages him to ask her out at school, and they two approach Ellen. It is then revealed that Ellen has Down's Syndrome, which surprises Stewie a bit, but seeing that Chris finds her attractive and sweet, urges Chris to go talk to her. He finally gets the courage to ask Ellen out, and the brothers return home to prepare for the date.

As the date went on, it became apparent to Chris that Ellen was not as sweet and kind as he initially thought. She is an extremely demanding and bossy person, often rudely asking Chris to do things for her, and had no interest in his life whatsoever.

She is voiced by Andrea Fay Friedman, who is also afflicted with Down's Syndrome.

Retrieved from "https://familyguy.fandom.com/wiki/Ellen?oldid=217496"
Community content is available under CC-BY-SA unless otherwise noted.