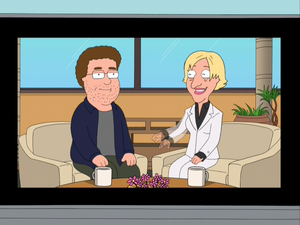 Ellen Lee DeGeneres (born January 26, 1958) is an American stand-up comedian, television host, actress, and gay and lesbian activist. She hosts the syndicated talk show The Ellen DeGeneres Show, and was a judge on the ninth season of American Idol.

In "FOX-y Lady", she appeared hosting her talk show. She had Seth Rogen as a guest. Unbeknown to her, she had rancid breath that smelled like her lover's vagina. She was voiced by Alex Borstein, who reprises her DeGeneres impression from MADtv.

In "And I'm Joyce Kinney", Ellen is revealed to only talk when her guests are talking.

Everyone making an appearance in "Follow the Money" takes a group photograph for Ellen at the end of the episode. In "HTTPete", Peter also references Ellen DeGeneres group selfie at the 2014 Oscars.[1]

Retrieved from "https://familyguy.fandom.com/wiki/Ellen_DeGeneres?oldid=204662"
Community content is available under CC-BY-SA unless otherwise noted.