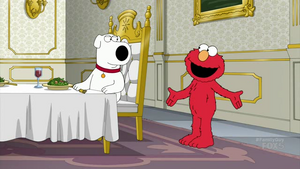 Elmo is a furry red Muppet monster with an orange nose that appears on Sesame Street.

Stewie asks Brian if Elmo and Santa Claus are alike in terms of existence in "Road to the North Pole".

In "A Lot Going On Upstairs", Stewie uses the power of his dreams to transform himself into Elmo, noting that he speaks bad English on an educational show.

In "The Woof of Wall Street", Cookie Monster, Elmo and Herry Monster take offense at Brian being called a monster for investing in a company that makes protein shakes from dogs. When Elmo points out that some monsters are nice, Brian retorts with his voice actor's sexual abuse accusation, which Elmo responds by noting that the accuser recanted the charge. When Stewie notes that a second case expired due to the statute of limitations, Elmo refuses to comment. After an uncomfortable pause, Cookie Monster shouts "cookie!" which elicits joy from Brian and Stewie.

In "Connie's Celica", Peter accuses Lois of using his Elmo toothbrush. Distracted by Connie D'Amico's bullying, she concedes she might have. Peter later reports the incident to the police.

Retrieved from "https://familyguy.fandom.com/wiki/Elmo?oldid=217936"
Community content is available under CC-BY-SA unless otherwise noted.