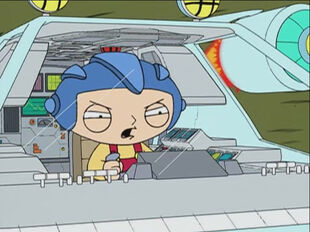 Stewie looking to take out his competition

Emission Impossible
Stewie attempts to stop Lois and Peter from having another child. 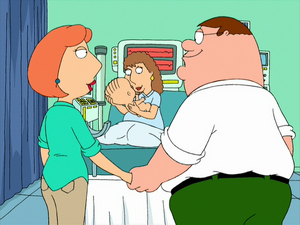 Quagmire babysits Meg, Chris, and Stewie while Peter accompanies Lois on a visit to her pregnant, newly single sister Carol. When Carol goes into labor, Peter drives her to the hospital, stopping only for cheeseburgers. Dr. Hartman mistakenly jabs himself with several needles and faints, leaving Peter to deliver the baby himself. Reminded of the wonderful experience of childbirth, Peter tells Lois that he wants to have another child. Lois gleefully tells the rest of the family, but Stewie is less than enthusiastic. He feels threatened in his position as the youngest and resolves to prevent the conception of another sibling.

Stewie attempts to interfere in a romantic moment by crying for attention. Foiled in this effort, he smears one of Peter’s shirt collars with lipstick but gets distracted by his own image in the mirror. In another attempt, he chloroforms Peter and utilizes a mechanical replica of him to insult Lois, but Chris accidentally knocks him out the window. When a candlelit dinner threatens to lead to intimacy between his parents, Stewie shrinks himself and a spaceship-like vessel and enters Peter’s body to destroy his sperm. 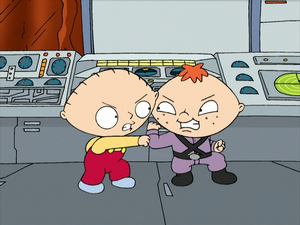 In his well-armed craft, Stewie easily slaughters the defenseless sperm with one exception: Bertram, who seems to be just as diabolically clever as Stewie himself. After a brief struggle and standoff, Stewie realizes that they have much in common. Additionally, with Bertram’s help, he could accomplish many goals, including Lois’ murder. They part on amicable terms, but Stewie has only moments before the ship reverts to its normal size. After a narrow escape through Peter’s tear duct, Stewie steers the craft back to his room with no time to spare.

Lois reconsiders having another child, to Stewie’s horror. He frantically tries to get her and Peter to resume their plans, but Peter retreats to the bathroom and masturbates with the assistance of a lingerie catalog. Stewie, appalled at the apparent death of Bertram, despairs until he notices a twinkle in Peter’s eye signifying that Bertram is still alive. His relief is only momentary as he realizes that his unborn brother may be too clever.

Retrieved from "https://familyguy.fandom.com/wiki/Emission_Impossible?oldid=216407"
Community content is available under CC-BY-SA unless otherwise noted.