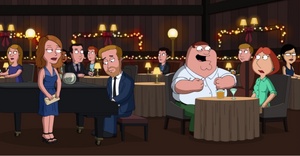 When Peter gets captured in North Korea in "Griffin Winter Games", Lois complains that he's always managed to ruin their vacations just like when they went to La La Land. As Ryan Gosling's Sebastian Wilder plays piano for Emma's Mia Dolan, Peter complains that he has yet to play his requested song "Dominick the Donkey". A resigned Ryan complies as Peter sings along.

Stone co-stars with Jesse Eisenberg in Opposite Eye Sizes in "Start Me Up".