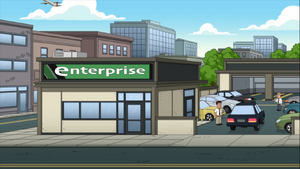 Enterprise Rent-A-Car is an American car rental company, which as of a result of mergers and acquisitions, was 21st on the 2008 Forbes list of "Largest Private Companies in America."

To his Ukrainian bride Zolata in "The Marrying Kind", Stewie takes a job with Enterprise Rent-A-Car. However, he finds himself at the mercy of a deadbeat employee named Levi not only slacks off from his assigned duties but tends to call Stewie names as the latter is powerless to do anything about it. When Zolata leaves him, Stewie looks forward to quitting his job, only to find out they promoted him to assistant manager, but even this doesn't stop Levi from taunting him.

Retrieved from "https://familyguy.fandom.com/wiki/Enterprise_Rent-A-Car?oldid=231159"
Community content is available under CC-BY-SA unless otherwise noted.