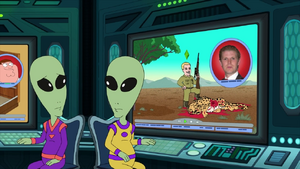 Eric Frederick Trump (born January 6, 1984) is an American businessman, philanthropist, and former reality television personality. He is the third child and second son of Donald and Ivana Trump.

When Peter asks God about an even higher power than Him in "Are You There God? It's Me, Peter", God agrees to the point. Two aliens are shown, with the one in charge of controlling Peter's actions declaring that his guy sucks and asks the other to trade. He changes his mind when he sees that the second alien is stuck controlling Eric.

In "Trump Guy", Melania Trump is seen blowing bubbles at the White House for Eric Trump to catch.

Retrieved from "https://familyguy.fandom.com/wiki/Eric_Trump?oldid=210040"
Community content is available under CC-BY-SA unless otherwise noted.