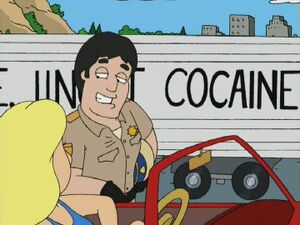 Henry Enrique "Erik" Estrada (born March 16, 1949) is an American actor, known for his co-starring lead role in the 1977–1983 United States police television series, CHiPs. He later became known for his work in Spanish language telenovelas, and in more recent years, his appearances in reality television shows and infomercials and as a regular voice on the Adult Swim show, Sealab 2021.

He appeared in "I Never Met the Dead Man", reprising his role as Ponch in an episode of CHiPs, getting distracted while on duty.

Retrieved from "https://familyguy.fandom.com/wiki/Erik_Estrada?oldid=122769"
Community content is available under CC-BY-SA unless otherwise noted.