The Evil Monkey was a resident of the Griffin household who lived in Chris' bedroom closet. He regularly tormented Chris, which had become a running-gag in the series.

The evil monkey lives in Chris' closet. As his name suggests, he originally appeared to be filled with malice towards all, particularly Chris, the only member of the Griffin family who is aware of the presence of the monkey in the house. Other family members usually ended up laughing at the notion that Chris has a monkey in his closet. The monkey was first seen in "Dammit Janet!". 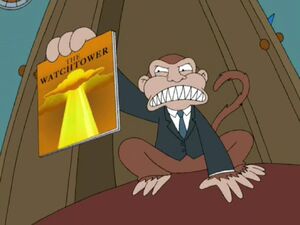 The evil monkey was accompanied by a human female on the red carpet to see Stewie Griffin: The Untold Story and pulled off his trademark pose on request. The pose was also used in "Road to Germany" when Stewie and Adolf Hitler were copying the mirror scene from the Marx Brothers film Duck Soup. Chris sung a song about him, titled "Evil Monkey Song", with his heavy metal band in "Saving Private Brian". In "Model Misbehavior", the evil monkey is shown relaxing after the Griffin's departure by smoking a joint and listening to Foghat's "Slow Ride" on vinyl through headphones on Chris' bed. In "Play It Again, Brian", he tried to scare Chris, only to find he wasn't there, but Herbert who was asleep as the monkey then slowly closed the closet door. In "It Takes a Village Idiot, and I Married One", He becomes a member of the Jehovah’s Witnesses, and is shown with an issue of The Watchtower, a magazine published by and closely associated with the Witnesses. Peter encounters the monkey in "Stewie Loves Lois", but dismisses him as Meg while upset after having his prostate examined.

In "The Former Life of Brian" he is beaten up by Brian's son Dylan Flannigan, allowing Chris finally to have access to his closet, where he discovers a very large quantity of feces. He was briefly seen in "420" during the performance of "A Bag of Weed", emerging from a portable toilet with a joint.

In "Hannah Banana", Chris captures him to prove his existence to his parents. It is revealed he points at people to strike up a conversation, suffers from a copper deficiency which explains why his arm shakes, and the sinister expression is merely the face he makes while he's thinking. He explains to the family his true origins and how he never intended to harm Chris. It is revealed he is not actually evil, but was rather in a "bad place" in his life after he caught his wife in bed with another monkey in "Ready, Willing, and Disabled". This caused him to become depressed, which ultimately resulting in him losing his job and his house, which is why he moved into Chris's closet. It is thought that Evil Monkey was once a lawyer due to the nature of his clothing in the scene where he caught his wife.

Although Chris at first doesn't trust him, the two develop a close friendship, bordering on a father/son relationship. After helping Chris and Peter repair their relationship, the Evil Monkey; or rather just Monkey now, decided it was time to move on. As such he doesn't live in Chris's closet anymore, but rather now lives in Jake Tucker's house. Like with Chris, the Monkey lives in Jake's closet and at unexpected moments opens the doors, points and shakes with a sinister expression on his face, frightening Jake. It is explained that he intends to help Jake and Tom Tucker, who like Peter and Chris have a less than pleasant relationship.

In The Cleveland Show episode "BFFs", Peter brings the Monkey along to rescue Cleveland, Tim, Holt, and Lester from being raped by hillbillies.

Monkey appears in a photograph from "Hannah Banana" with Chris in "The Talented Mr. Stewie" as Stewie sorts photographs to make a collage for Rupert.

The Evil Monkey joins several other animals of the show as well as the cast in singing "Blue Shadows On The Trail" in "Wild Wild West".