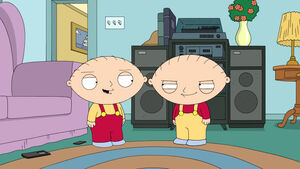 Evil Stewie is the evil second clone after Bitch-Stewie of Stewie Griffin that Stewie accidentally creates in a failed attempt to become more evil in "The Hand That Rocks the Wheelchair." Evil Stewie appears almost completely identical to Stewie, except for the fact that he wears yellow overalls with a red shirt underneath, in contrast to the original Stewie, who wears red overalls with a yellow shirt underneath. Far more evil than the original even at his worst, Evil Stewie participates in such behavior as: attempting to suffocate Brian, cutting off his tail and choking Stewie with it, beating up Stewie, torturing and possibly killing a boy and his parents who bullied the original Stewie in the DVD version, slicing a woman in half, and luring the Kool-Aid Man to his demise.

In an attempt to get rid of Evil Stewie, Brian lures him by tying himself to a flag pole and calling out for him. Evil Stewie appears, delighted, after which, the normal Stewie appears, and the two battle. During the fight, however, both of their clothing is lost, leaving Brian oblivious to whom the real Stewie is. Brian later frees himself and gets hold of a gun and points it at the two twins. However, he is not sure which one to shoot, and therefore decides to put them to the test by telling them to look at their feet. One of them is confused by the question, while the other laughs at his feet. Brian then shoots the twin that found the question odd, and then expresses relief over how he did not shoot the wrong Stewie. However, as Brian and the remaining twin are walking away, the surviving Stewie turns his head, revealing yellow eyes as evil laughter is audible in the background .