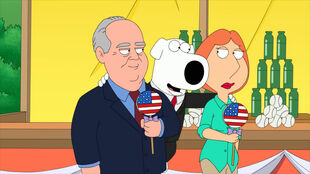 Excellence in Broadcasting
When Brian learns that Rush Limbaugh is going to be at the Quahog Mall for a book-signing, he decides to go down there and give him a piece of his left-wing mind. 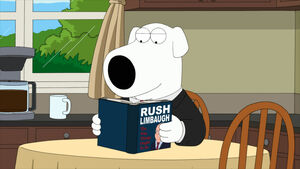 Lois discovers that conservative radio talk show host Rush Limbaugh is holding a book signing in Quahog, Rhode Island, causing Brian to decide to confront Limbaugh about his political beliefs. At the signing, Brian is dumbfounded after Limbaugh asks whether or not he has read anything he had ever written, causing Brian to leave in frustration. That night, as Brian is walking home, he is suddenly attacked by a street gang, and is immediately saved by Rush Limbaugh, who single-handedly defeats the gang members. Thankful, Brian agrees to read Limbaugh's book, and soon begins to believe that "conservative Republicanism" was right all along. The next morning, Lois questions Brian's conviction, citing his past liberalism, with Brian defending his right to change his mind. Deciding to talk with Limbaugh about the book, Brian thanks Limbaugh, and the two then travel to the Republican National Headquarters, and are soon greeted by former President of the United States George W. Bush, and United States Senator John McCain. 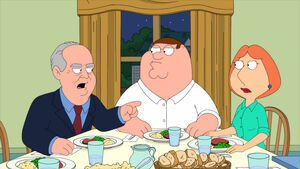 Returning home, Brian informs Lois that Limbaugh will be coming over for dinner. That night, Lois and Peter begin arguing and challenging Limbaugh politically. Deciding to confront Limbaugh for brainwashing Brian, Lois demands for their dog to go back to the way he used to be. Angered, Brian decides to move out and become roommates with Rush. Asking whether Brian is intending to stay at his home for just a few days, Brian begins to irritate Limbaugh with his newfound conservatism. Deciding to follow Limbaugh to his radio show, Brian attempts to voice his own political opinions about Speaker of the House Nancy Pelosi, causing Rush to become frustrated and throw him out. Deciding to prove him wrong, Brian attempts to waterboard Pelosi, before being apprehended and arrested. Being bailed out by Limbaugh later that day, Brian continues to assert his conservatism, while Limbaugh attempts to convince Brian is only fighting against the establishment due to his desire to be the underdog. Reassuring Brian of his liberal convictions, Rush leaves the prison. Outside, they heckle each other with reassurance, and the episode ends with Limbaugh then transforming into a bald eagle, and flying away into the skyline.