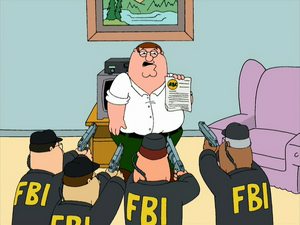 The Federal Bureau of Investigation (FBI) is an agency of the United States Department of Justice that serves as both a federal criminal investigative body and an internal intelligence agency. The FBI has investigative jurisdiction over violations of more than 200 categories of federal crime. Its motto is the backronym of FBI, "Fidelity, Bravery, Integrity".

In "A Very Special Family Guy Freakin' Christmas", agents hold up Peter Griffin when he attempts to record a matchup of Monday Night Football on ABC of the Pittsburgh Steelers and New England Patriots. Recording televised sporting events is prohibited without written consent by the league the teams belong to as well as the channel that broadcasts the game. When the agents find that Griffin did not meet both requirements, they stop him from ever repeating the act by shooting his VCR.

Two other agents offer to watch the Griffins' house while they are in Bumblescum, Alabama to protect Chris Griffin from a robber he witnessed in To Love and Die in Dixie. The agents accidentally give him the Griffins' location.

Retrieved from "https://familyguy.fandom.com/wiki/FBI_Agents?oldid=156482"
Community content is available under CC-BY-SA unless otherwise noted.