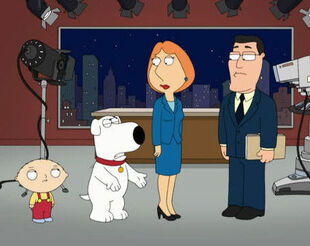 Brian upset with Lois for working for FOX News

FOX-y Lady
Lois gets a job with FOX News.

Plot: A reporter for the Fox News Channel is fired when her first appearance on HDTV exposes all her facial wrinkles and makes her unattractive, leaving a job opportunity open. Lois decides to take the job, despite Brian's claims that Fox News is a heavily biased network, and becomes a reporter.

She is assigned to do an exposé on Michael Moore to prove that he is homosexual, but when she spies on him outside of his house, she sees Rush Limbaugh coming out, leading her to conclude that Moore and Limbaugh are in a gay relationship. 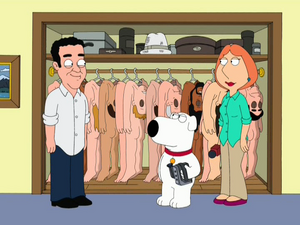 The executives at Fox News, the conservatives as they are, refuse to allow any material against fellow conservative Limbaugh to be broadcast, leading Lois to realize that Brian was right about Fox News. Lois and Brian decide to take the story into their own hands and confront who they expect to be Moore and a naked Limbaugh in the same bedroom, only to discover Moore with a rubber Limbaugh costume. It would appear that Rush Limbaugh has always been Michael Moore in disguise, only for him to reveal that he is in fact Fred Savage, who also does several other famous personas; Lois and Brian realize that Fred Savage is the greatest actor in the world and successfully pitch this story instead. 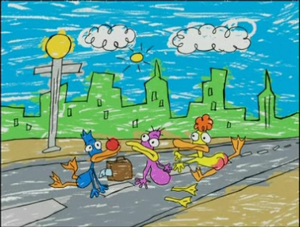 In the end, Lois loses her job; however, since everything is back to normal, she doesn't bother to reveal how or why, nor does anyone really care.

Meanwhile, Peter taking full advantage of Lois's connections with Fox News, with Chris and Meg, he decide to make their own cartoon series about a group of handicapped ducks called Handi-Quacks. Although the finished product is very crude when pitched Fox agrees to air the show, though they begin to offer their own ideas to the show. Greatly offended, Peter refuses to let them change his material. This impresses the executive into allowing Peter to air the show without their changes, but Peter ends up refusing to let his show be aired at all.

Retrieved from "https://familyguy.fandom.com/wiki/FOX-y_Lady?oldid=216334"
Community content is available under CC-BY-SA unless otherwise noted.