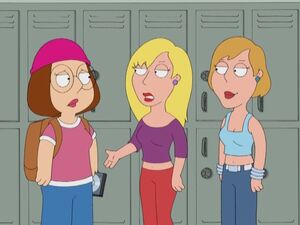 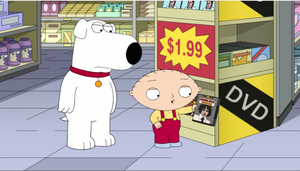 Fairuza Alejandra Feldthouse (born May 21, 1974), better known by her stage name Fairuza Balk, is an American film actress. She made her theatrical film debut as Dorothy Gale in Disney's Return to Oz. Balk also made appearances in Valmont, The Craft, The Island of Dr. Moreau, American History X, The Waterboy, Almost Famous, and Personal Velocity: Three Portraits.

Fairuza voiced Connie DiMico only in "Let's Go to the Hop". She also voiced a character in "Peter, Peter, Caviar Eater".

In "Short Cuts", Stewie finds a Fairuza Balk film at Goldman's Pharmacy and notes to Brian that he was just thinking about what had happened to her recently.

Retrieved from "https://familyguy.fandom.com/wiki/Fairuza_Balk?oldid=219255"
Community content is available under CC-BY-SA unless otherwise noted.