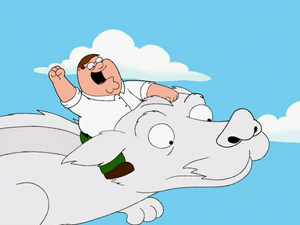 Falkor is a luckdragon, a character in the book and film The Neverending Story who helps Atreyu in his quest to find a cure for the Empress after escaping the web of Ygramul the Many.

When Brian becomes concerned that Lois is becoming obsessed with shoplifting in "Breaking Out is Hard to Do", he reminds her of how badly Peter can become obsessed with things such as his fantasy world. In a cutaway, Peter rides Falkor as in a scene in the film adaption, but as Falkor complains that Peter is too heavy, he crashes to the ground. Despite this, Peter's enthusiasm never wanes. Falkor is voiced by Paul Ganus.

When Peter becomes a millennial in "HTTPete", his mentor Hammer has him be on fleek by riding Falkor.

Retrieved from "https://familyguy.fandom.com/wiki/Falkor?oldid=204667"
Community content is available under CC-BY-SA unless otherwise noted.