View source
watch 01:36
We're Getting Mutants in the MCU - The Loop
Do you like this video?
Play Sound
General
References
Notes/Trivia
Quotes
Goofs 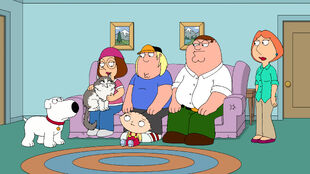 Family Cat
The Griffins adopt a new cat in which Brian claims to be evil. 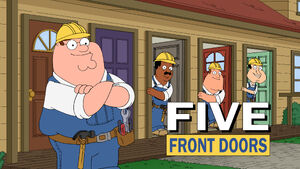 When Peter and the guys find they have a shared affinity for HGTV home shows, they decide to get into the renovation business. When things don't pan out with the public, they turn their attention to the Griffin home where Peter intends to install more doors. He knocks a huge hole in the wall before he is stopped by Lois, which allows a stray cat to wander in and is taken in by the family, particularly Meg. 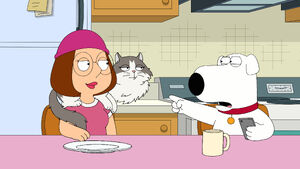 Brian is initially unhappy about the situation, but lets it go at that. But when he discovers that Pouncy not only can talk, but has nefarious plans for Meg, he is unable to find anyone to listen to him. Meg's relationship with Pouncy advances until they share an intimate dance, and later that night, Pouncy leads her out of the house under her control. The next morning, Brian tries to apologize for making a scene but discovers that Pouncy has Meg. Quagmire, who had approved of the adoption earlier, advises him that thanks to a parasite carried by cats, Meg is under their control and is being prepared to become a crazy cat lady. Gearing up, Brian finds her in a run-down house taking care of Pouncy and numerous feral cats. Despite his best effort, Brian falls short and is captured as Meg prepares to put on a hand knitted sweater to become a full-blown cat lady. Quagmire arrives and stops her, taking on the sweater for himself in admitting that he's already too far gone. Brian pledges to be a better pet to Meg, but finds this involves an intimate encounter in Meg's room with peanut butter, although Stewie questions her use of chunky-style.