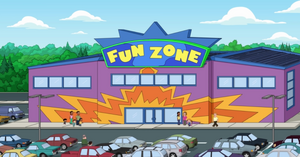 The Family Fun Zone is where Hudson hosts his birthday party in "Pal Stewie".

After he and Stewie become best friends, Stewie is dismayed to find out from the other children that Hudson's birthday party is the following day and he did not receive an invitation. Angered, he plots a commando-style raid and knocks out all of the other guests with gas and confronts Hudson with one of his ray guns. He discovers that he did receive an invitation but never responded back. Brian arrives after discovering the plot and reveals that he destroyed the invitation because he didn't want to lose his own friendship with Stewie because it appeared he had been pushed aside for Hudson as Stewie points out that they are more than friends in being family.

Retrieved from "https://familyguy.fandom.com/wiki/Family_Fun_Zone?oldid=220682"
Community content is available under CC-BY-SA unless otherwise noted.