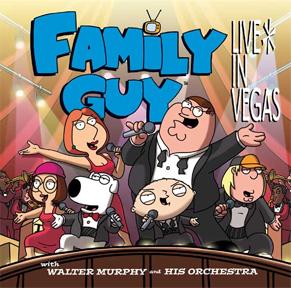 Family Guy: Live in Vegas is a soundtrack album for the animated television series Family Guy. It was released on April 26, 2005 by Geffen Records. It was composed by Walter Murphy and creator Seth MacFarlane. The album features only one song from the series, the theme song, the rest of the original songs were composed exclusively for the album. "The Last Time I Saw Paris", "Slightly Out Of Tune" and "One Boy" are reworked versions of pop standards. It features Jason Alexander, Patti LuPone and Haylie Duff as guest stars. It includes Rat Pack and Broadway inspired songs.

Retrieved from "https://familyguy.fandom.com/wiki/Family_Guy:_Live_in_Vegas?oldid=173832"
Community content is available under CC-BY-SA unless otherwise noted.