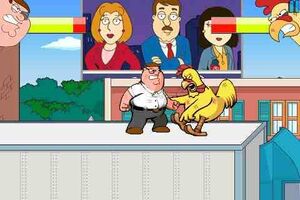 Family Guy: Uncensored is a 2009 iPhone/iPod Touch app that was designed by Glu. The app can be bought for $0.99 on the iTunes App Store, and a free lite version is also available for download.

Retrieved from "https://familyguy.fandom.com/wiki/Family_Guy:_Uncensored?oldid=218576"
Community content is available under CC-BY-SA unless otherwise noted.