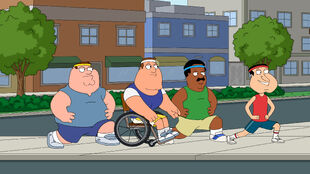 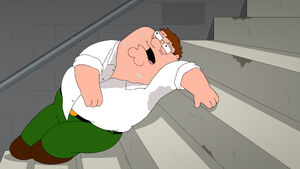 When Peter decides to take the stairs at work to avoid an uncomfortable situation with a co-worker, he finds he is unable to complete the journey. When even Joe can't help him, he pulls the fire alarm which floods the brewery, causing millions of dollars in damages. Realizing he has a weight problem, he gets the guys to agree to help him get healthy. But when Peter cannot keep to his work out and diet, Quagmire takes drastic measures by locking him in his basement which finally results in Peter losing a lot of weight. Impressed with the new slim Peter, his boss Sheila jokes about having sex with him. He tries to turn it into a three-way with Lois, but when the latter turns him down, he tells Sheila he's still up for the sex. 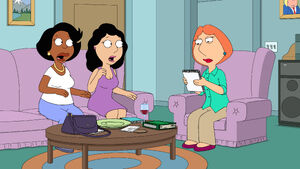 Meanwhile Lois' creative writing group with the wives fails to impress Donna and Bonnie with her romance novel. But when Brian finds her manuscript, he interprets this to mean this is something she's looking for in a lover. An attempt to impress with a horse fails, but a trip to the grocery store to find wine reveals that not only is it the location of her novel, but a clerk named Horatio is the person described in it. When Lois announces that she's is going to the grocery store and won't be home until late, Brian and Stewie follow where they find Lois taking Horatio for a ride to a stable. Confronting her and begging her not to have an affair, Brian reveals that not only did he read her manuscript but tried to use it to take advantage of her. Highly upset with Brian, Lois reveals that she met Horatio at a group home where he has learning disabilities and she takes him to the stables so he can be with the horses. As Brian tries to spin an apology, Stewie arranges for a horse to give him a good kick.

As Brian and Stewie discuss Lois' manuscript, Chris ends the episode with a plug for libraries and books, especially Mötley Crüe's The Dirt.

Retrieved from "https://familyguy.fandom.com/wiki/Family_Guy_Lite?oldid=216315"
Community content is available under CC-BY-SA unless otherwise noted.