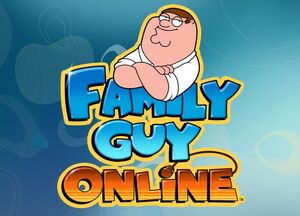 Family Guy Online was an online MMO officially sponsored by FOX. The game was browser based and was developed using the Unity 3D Engine. Clams are set to be in-game money and are earned by doing things and accomplishing tasks that you might be challenged to complete. You could pick up 60 in the registration process.

The Stewie (or toddler) class excels in attacking and can use various comical weapons, like lazer guns and hypno-goggles.

The Chris/Meg (or teenager) class can use several status ailment-inducting skills. They can cause enemies to take frequent damage, lower their defensive and offensive capabilities, and other similar features.

The Peter (or dad) class uses a lot of multi-targeting attacks and has the most health of any class, but low energy.

The Lois (or mom) class heals and buffs up the team, and similar to the Stewie class learns mostly attacks, but less potently.

The Brian (or dog) class was notable for the only class not available from the beginning. It must be unlocked by logging in at least once a day for 6-days, or purchased with the welcome pack for $19.99. The Brian class is an all-rounded class, capable of attacking, altering stats, and in some scenarios, healing.

There were two types of skills: "Energy Builders", and "Energy Spenders". Builders are low-level attacks that do minimal damage but build up energy, and Spenders are much higher leveled attacks that do more damage or have a more effective use than Builders, but use up energy. Similar to health, you gain energy as you level up.

As of January 18th, 2014, Family Guy Online permanently closed and will not leave beta.[1]

Retrieved from "https://familyguy.fandom.com/wiki/Family_Guy_Online?oldid=160293"
Community content is available under CC-BY-SA unless otherwise noted.