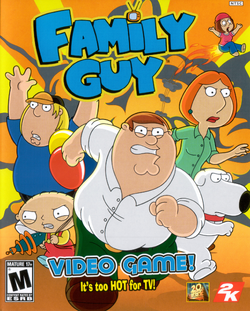 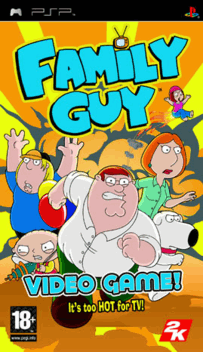 Family Guy Video Game! is a 2006 video game, based on the television series, Family Guy, created by Seth MacFarlane, and released by 2K Games. This game can be played on both PlayStation 2 and Xbox systems in the USA as well as PSP, Wii and Xbox 360 systems in the UK.

The game's structure reflects on different episodes of the TV show, and its game-play is similar to an arcade game. The story of the game allows the player to control the three main characters, Peter, Stewie and Brian from the series. All the stories are linked in specific ways. In Stewie's story, his half-brother, Bertram, returns and is hoping to take over the world. Stewie's storyline revolves around trying to stop him. In Peter's storyline, after being crushed by his own satellite dish, Peter is under the impression that a Mr. Belvedere, a character from 80's TV, has kidnapped his family. Peter searches for his nemesis through the game. And lastly, in Brian's storyline, Brian is arrested for apparently impregnating prize-winning dog Seabreeze. Brian, who did not, must find the real culprit.

Each character has his own specific levels. Stewie's are shooting ones, while Peter's are battling ones, and lastly, Brian's are stealth ones. The controls for each level are very specific. There are a total of 25 levels, 8 for Stewie, 11 for Peter and 6 for Brian. The locations in the game include the Griffin house, the Quahog Hospital, the police station and its warehouse, Geronimo's Palace casino, the harbor, and various places in Peter's body, the Quahog 5 News station and the dog track. A main feature for the game are its mini-games that are in the same style as the cutaway gags that are notable for being less than 10 seconds long. Also featured in the game is the various disguises and costumes that Peter and Brian are seen wearing that have been previously seen on the show. Peter's costumes are Rufus Griffin, a hooker, and A.N.N.A., the Automaton Nuclear Neo-Human Android from "The King Is Dead". Brian's disguises include a lamp, a pimp, a cheerleader and the Peanut Butter Jelly Time banana suit. Stewie does not use disguises, but does receive weapon upgrades as the game progresses.