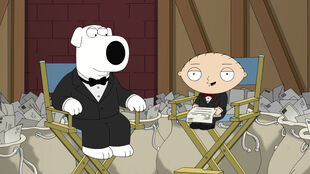 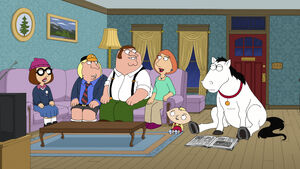 Chap of the Manor

The episode uses the premise that Family Guy is based on a British television show.

When Queen Elizabeth II passes in parade, Neville tells his friends about being related to the Queen and wishes to gain a lock of the Queen's hair to test it. He tries to set up a fake barber chair along the route. When this fails to gain the Queen's attention, Neville and Collingsworth steal a British police officer's motorcycle and give chase to the Queen's carriage, causing her to wreck and be killed in a tunnel. As Neville and Collingsworth try to nonchalantly walk away, they are chased by a cohort of London Bobbies. Back at the flat, Neville discovers they aren't related to royalty after all. 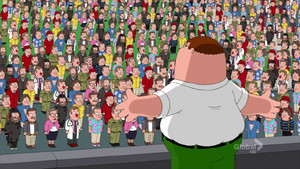 When Robin Williams gets roasted, Peter takes offense and wishes everyone was Robin Williams and is struck by lightning. When he wakes up, he finds out that everyone he touches turns into Robin Williams. After vowing to be responsible with his gift, Peter turns everyone into Robin Williams. But when he accidentally turns his family into Robin Williams, he realizes the horror and tries to run, turning even inanimate objects into Robin. Stewie and Rupert try to blend in by pretending to be already changed. Finding himself with a town filled with Robin Williams, he tries to commit suicide but fails. He eventually frees everyone by removing them from their make believe jobs and sending them out into the world but keeps enough characters to stand in for his family as he goes insane and cuts off his hands to keep from changing anyone else as Stewie sits on the rooftop noting of all the variations of Robin, they couldn't get permission to do Disney's Genie from Aladdin. 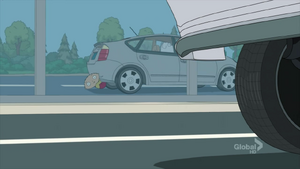 The audience sees the world through Stewie's eyes as Lois changes him, Meg wishes him to keep her ring, and his friends ask him to go down the slide at the playground. Later, Stewie secures a Twinkie to stuff in Brian's tail pipe on his car but ends up going for an unexpected ride with Brian where he chases a squirrel in his car. In the bath, he imagines a doll being eaten by a shark and Peter joins him. At bedtime, he makes a quick trip through time to stop Kurt Cobain from killing himself. As Lois reads a bedtime story, a drunken Peter interrupts for sex as Stewie is forced to listen. In his dreams, he pictures Peter and Lois as lumberjacks. When Peter finishes early, Lois is forced to use a "chainsaw" to finish "sawing her tree."