Fandom/Wikia's "anyone may edit" policy does not give free rein to rewrite descriptions to suit yourself, they will be reversed and persistence will result in being blocked. We encourage new information, not picking over past entries. You may correct misspellings, as long as it is understood that American English is used here. If you wish to question the accuracy or wording of a statement, you may do so on the talk pages and it will be investigated or discussed.

Due to the work involved with plot summaries and providing episode information on multiple shows, editors are asked to refrain from editing pages unrelated to new episodes on premier broadcast nights of any Seth MacFarlane animated show. Working outside of this request will result in a temporary block until the night has concluded.

Under no circumstances will fan fiction or other fan-produced work be permitted here. All pages should be of information contained in the television show. Professionally produced media available for sale may be included as "Merchandise". Information provided in books, almanacs, DVD covers or even interviews is not considered official until it is used within an episode.

If reporting a fact, be sure to link a web site or an episode the event occurs in. Items reported as facts without naming a source of information will be challenged or immediately removed. All sources of information must be publicly verifiable. "I heard at a convention/stage show..." is not acceptable unless footage is available for confirmation.

We are no longer supporting Wikipedia in new or revised links. If a link to an outside source is warranted for things that might need further explaining, it is now preferred to link to an official site or news source. HOWEVER, we are not going on a "search and destroy" to remove every existing Wikipedia link already on the wiki. By warranted, it is meant for odd references, not common things like films or band titles.

Speculation is not permitted. Edits judged to be an attempt to forward a personal opinion or agenda will be removed.

Real world time and events have no bearing within Family Guy. Dates are irrelevant. Just because an episode aired the previous year does not mean a character has automatically aged a year. As of this time, Stewie continues to be age one, the same as he has been since the first season. Ages attributed to characters should be tied to a broadcast episode and not to the calendar date an episode aired. By the same token, events on Family Guy have no effect on real events, the point of this wiki is to report what happens in each episode without becoming fixated on how it effects reality or even other episodes.

Still-living celebrities and fictional characters belonging to other entities killed on the show are not considered deceased for the purpose of categorizing.

Do not create open links for others to complete later. If you create a link to make a page, you are expected to write that page or link to an outside source in a timely manner. It is preferred that you DO make a link in an appropriate space when creating a new page, rather than creating one using the automatic page generator. An exception for creating open links to be filled in later will be granted for upcoming episodes until more information is known.

Items must be seen to qualify for a page so an appropriate screenshot may be used. Items only referenced should be linked to an outside source if necessary. Acceptable exceptions for this are for named immediate family members referenced, cast and crew or guest voices prior to their episode airing.

Please provide an authoritative source if claiming a voice role was done by a specific actor/actress. IMDB is NOT accepted! Unsourced edits will be reversed and persistent attempts will be treated as vandalism. Preferred sources include press releases from FOX, TV Guide, respected news media or an official page for the voice performer.

References should relate to a scene or title imitated in another medium such as a movie, television show or book. Cultural References are generally not utilized on this wiki. When they are considered noteworthy, they will be placed on the Notes/Trivia page.

Notes/Trivia include any other items, such as mentioning a pop song used in an episode or an action repeated in a previous episode.

Notes are generally organized as such:

This isn't set completely in stone as there is some wiggle room depending on how important something is or if it concerns an already logged note.

Quotes may include adult language. Do not edit a quote to remove adult language if it is known to be accurate based on an unedited version of an episode. Quotes should only be placed in the episode quotes page, not in the narrative of a character or episode. The Quotes page does not mean transcription of the script. Non-quote descriptions are to be used sparingly and Quotes may only end in spoken words. The best quotes are a single spoken line of dialog or a set up and punchline. Due to numerous failures to understand this concept, once a quote is "taken" and entered onto the page, no additions to the quote will be accepted without a talk page discussion as to why it should be included as an extended run of dialog. If alternate dialog is offered, the FIRST quote entered onto the page will stand and the quote will have been considered used.

Please pay attention to existing quote formatting, by reviewing other pages if necessary. Italics and bold are to be used properly and parenthesis are not used for quotes.

Goofs should primarily be limited to items that disappear or change in a scene. Changing an opinion over time is not considered a goof. As there is no continuity, conflicting information from a previous episode will be listed as a note, not a goof. A color variation in a television or movie scene or character, as well as changing the spelling of a known name is usually done to avoid copyright infringement or to qualify as parody and is not a goof. If something can be logically explained then it is not a goof. Scenes done intentionally to move a story along or for humor are also not considered goofs. 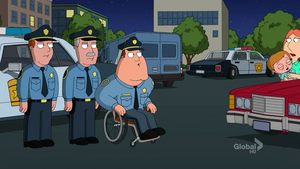 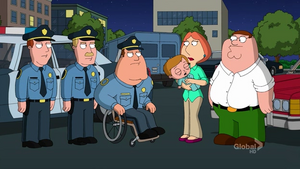 Do not create new categories without prior approval. We don't need a category for Left Handed Dentists or for episodes that feature a particular character. This wiki prides itself on being clutter-free and it is rare for a new category to be added. A proposal for a new category should ensure that sufficient pages exist to justify it's existence and there should be no confusion if a page should qualify for inclusion. Currently, a minimum of 8 pages are considered the threshold for a proposed category. Conversely, a proposed category should not have numerous pre-existing pages qualify for inclusion requiring a lengthy page review process. Categories subject to numerous mis-classifications or of a controversial nature will be denied.

This page is a work in progress. Suggestions or comments for additions or improvements should be submitted to my talk page. --Buckimion 19:12, July 25, 2010 (UTC)

Retrieved from "https://familyguy.fandom.com/wiki/Family_Guy_Wiki:Editing_Policy?oldid=201414"
Community content is available under CC-BY-SA unless otherwise noted.