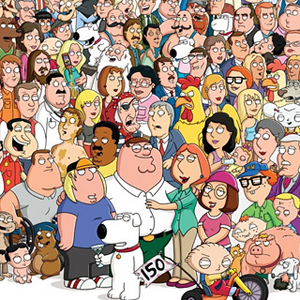 It is the desire of this wiki that every subject page eventually have a picture or video related to Family Guy, preferably a screenshot from an episode. Due to formatting issues, it is recognized that pictures will not fit on every page until sufficient text exists. This is particularly true for Reference, Notes, Quotes or Goof pages in episodes.

Due to a tightening of FOX copyrights, video clips from Family Guy may only be submitted from approved FOX sources. FOX can and does patrol this wiki looking for unapproved videos and will take action to have them removed. Video shot at television screens to get around Youtube copyright blocks will still be deleted here and treated as a violation.

Pages honoring celebrities, either in caricature or celebrity voice actors should have a screen shot of the character voiced or the celebrity themselves. An additional "real" image of the celebrity will be permitted provided that it is not readily apparent that they were removed from other sites such as IMDB. Live action image screenshots from Family Guy have priority over all other non-animated screenshots.

Attempts to load a page with multiple images to create a gallery or fan site are not permitted and will be removed. Fair use limits images to just enough to illustrate the subject in question. Multiple images will result a violation of copyright.

Images, including screenshots, judged to be uploaded for titillation purposes will be deleted.

Minor characters should be limited to a single profile screenshot unless circumstances warrant a second screenshot to illustrate their action in an episode.

Long pages dedicated to the main characters and staff are permitted to have multiple images. Multiple character images must pertain to a subject discussed in detail related to that character. Pictures submitted must be able to fit without interfering with page formatting.

Images or video submitted must be unique to the subject. Previous images may not be replaced except as noted below regarding main character images. Simply enlarging an image or changing the format/extension isn't grounds to replace a picture. Also, be careful when naming your image. Images containing the same name will trigger a warning that a name match exists. Overriding an image name warning may interfere with a picture dedicated to a particular subject. Images should also preferably be named to associate it with the subject, rather than a random number or generic name such as "Stewie".

Images used as the main image for an episode are usually provided by FOX, as well as possibly several backup images. In the event that FOX fails to provide images prior to an episode broadcast, a user provided image may be used. It is preferential that the main image tie strongly to the title or main plot and secondary image(s) to any subplots. Again, without interfering with page formatting.

Normal full-frame images should be 300px and located on the right or left of the page. Cropped images will be sized smaller accordingly. Pictures will be adjusted to properly fit a page if you are unsure what works best. Captions should be unnecessary as the picture should already relate to the paragraph or page.

Fan drawn art or redrawn screenshots are not permitted anywhere but in a user's own user page.

Images & video uploaded but not properly used in a page are automatically tagged for deletion. The wiki is not to be used as a personal server.