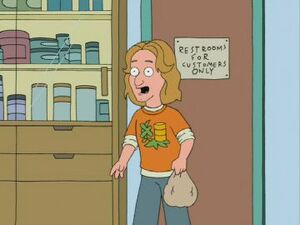 Fast Times at Ridgemont High is a 1982 American coming-of-age teen-comedy film written by Cameron Crowe (adapted from his book) and directed by Amy Heckerling. The film follows a school year in the lives of freshman Stacy Hamilton (Jennifer Jason Leigh), freshman Mark Ratner (Brian Backer) and their respective friends Linda Barrett (Phoebe Cates) and Mike Damone (Robert Romanus), who believe themselves wise in the ways of romance and counsel their younger counterparts. The ensemble cast of characters also includes Jeff Spicoli (Sean Penn), a perpetually stoned surfer, who faces off against uptight history teacher Mr. Hand (Ray Walston), who is convinced that all of his students are on "dope." Stacy's brother, Brad (Judge Reinhold), is a popular senior who works to pay for a car.

Randall Fargus, a teacher at Buddy Cianci Junior High School in "Running Mates", is a take-off on Mr. Vargas from the movie.

The title of "Fast Times at Buddy Cianci Jr. High" is based on the movie.

Peter Griffin’s sneaking out of his room in "Let's Go to the Hop" is a parody of Stacy sneaking out of her house, with the soundtrack featuring a ripoff of Jackson Browne’s “Somebody’s Baby”, which featured in the original movie.

When Mort Goldman throws the pot of hot coffee on Peter in "Brian the Bachelor", it is a direct parody of the ending of the film.

In "Chris Cross", Peter calls Damone using clips taken from the film after both he and Lois forget their money on a date. After asking Damone to bring his money, Peter hangs up and notes that was the last time they saw Damone. The scenes takes place after Mike promises and then bails out on helping to provide funds for an abortion for Stacy Hamilton, a girl he got pregnant.

After crashing Joe's classic car in "Boy's Best Friend", Peter and the guys leave it in his driveway in a parody of a scene from Fast Times, although Joe thinks it's a reference to Ferris Bueller's Day Off despite having just watched Fast Times at Ridgemont High with the guys.

Retrieved from "https://familyguy.fandom.com/wiki/Fast_Times_at_Ridgemont_High?oldid=230190"
Community content is available under CC-BY-SA unless otherwise noted.