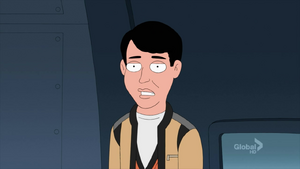 Ferris Bueller's Day Off is a 1986 comedy film written and directed by John Hughes. It stars Matthew Broderick, Alan Ruck, Mia Sara, Jeffrey Jones and Jennifer Grey. The film was released by Paramount Pictures on June 11, 1986.

The film follows high school senior Ferris Bueller, who decides to skip school and spend the spring day in downtown Chicago. Accompanied by his girlfriend Sloane Peterson and his best friend Cameron Frye, he creatively avoids his school's Dean of Students Edward Rooney, his resentful sister Jeanie, and his parents. During the film, Broderick occasionally speaks to the camera to explain to the audience his character's techniques and thoughts.

In "Da Boom", the scene in which the family is walking to Natick, Lois tries to get Chris to stop saying "Left foot, right foot" by saying "Stopiiiiiit!" This is similar to when Jean tries to stop her mother from yelling at her while she's driving. She says it in almost exactly the same manner.

After his mind control device short-circuits and Stewie is chased by Chris in "The Story on Page One", he eludes him by disguising himself in a trenchcoat and sunglasses resembling Ferris from the film.

In the third Stewie Griffin: The Untold Story segment "Stu & Stewie's Excellent Adventure", Stewie is racing the family car to the pool in a parody of the movie's climax, with the same background music used.

The scene in which Stewie visits the Art Institute of Chicago, erroneously referred to as the Chicago Museum of Art, in "The Tan Aquatic with Steve Zissou", is a direct homage to the movie. The painting Stewie stares into is Sunday Afternoon on the Island of La Grande Jatte. The song accompanying this segment is the original from the film, and is a cover of the acoustic version of the song by The Dream Academy of “Please, Please, Please Let Me Get What I Want” by The Smiths.

The film is a topic of conversation in "Movin' Out (Brian's Song)" for Peter Griffin and Jillian Russell-Wilcox when they agree that the title should have been Ferris Beuller's Day On.

In "Foreign Affairs", the scene in which Peter pulls the children from school is copied from the film.

Ferris narrates "Here's where Brian goes berserk" in "Yug Ylimaf" is a parody of a similar scene in Ferris Bueller's Day Off. Rolling the "odometer" back is also a key scene, in which the odometer of a car was rolled back to conceal that it had been driven. Ferris is voiced by Alec Sulkin.

In "Take a Letter", the sound Stewie makes when he believes he may be able to get Chadley's wallet is the hook from "Oh Yeah" by Yello, notable for its inclusion at the end of Ferris Bueller's Day Off.

Stewie and Brian mention the film when trying to figure out 80's movies that have houses with trellises in "Big Trouble in Little Quahog".

In "You Can't Handle the Booth!", Peter thinks pretending to be sick is the most successful scam since Ferris Bueller's Day On.

In the Romeo and Juliet segment of "Heart Burn", Peter's Romeo tells Stewie's Tybalt that he is Abe Froman, the sausage king of Chicago, which parodies a scene from Ferris Bueller in which Ferris uses the same alias to secure a table at a fancy restaurant.

Grace, the school secretary from Ferris Bueller appears in "Holly Bibble" as Carter Pewterschmidt/Pontius Pilate's secretary, quoting several lines from the film. Carter takes a moment to point out that Grace is played by Edie McClurg, who is actually recreating her role.

Retrieved from "https://familyguy.fandom.com/wiki/Ferris_Bueller%27s_Day_Off?oldid=222397"
Community content is available under CC-BY-SA unless otherwise noted.