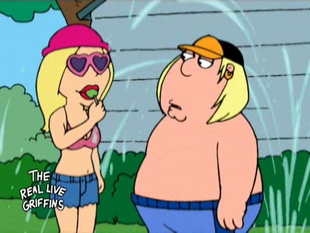 Fifteen Minutes of Shame
When the Griffins constantly embarrass Meg, she decides to put them on the TV show Diane to embarrass them. 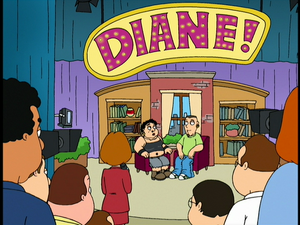 Peter plays a magical clam in a historical re-enactment of Quahog’s founding, because that was how Quahog was founded. But, when Peter gets caught on a wave, his costume is washed away, leaving him to show up ashore naked, to which he does not even seem to mind, driving home and stopping at a gas station naked. Meg is of course embarrassed by this, but when he embarrasses her at her slumber party, she decides to take action. She gets the family invited on Diane!, Diane Simmons' talk show to discuss their dysfunction. Of course, they show their embarrassing selves there, but instead of ending the embarrassment, this gets the family their own reality show, The Real Live Griffins. Once Meg gets tired of this she leaves the family, and the show. 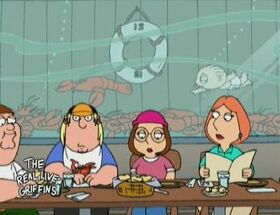 Her replacement is a teenage sex symbol who steals the show. Meg attempts to move in with Cleveland and later Quagmire, but mishaps in their homes causes Meg to leave. Peter and Lois meet with Meg secretly to tell her they can't be seen together due to the new Meg. Eventually, when Peter and Lois miss Meg, the whole family is replaced after they fail to convince the producer to bring Meg back, and they are forced to live in a motel room until the reality show contract runs out.