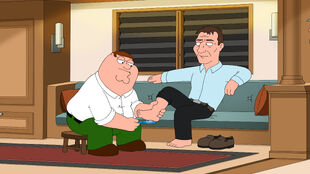 Fighting Irish
Peter bites off more than he can chew when he brags that he can beat Liam Neeson in a fight. 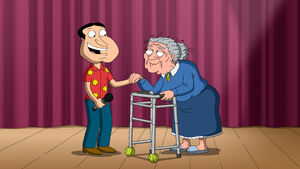 Quagmire invites his friends to “Quagfest” to celebrate his 1000th sexual conquest. As they watch the news, they also find out that Liam Neeson is also going to be in nearby Connecticut to film a movie and Peter spouts off about beating Neeson as he does when he gets drunk. Quagfest features a parade and introduces Miss Eleanor, Quagmire's first sexual partner before he has sex with a large mouth bass for his 1000th partner. Back at the Clam, Peter's drinking and continuing about Liam makes the guys call his bluff about Neeson and they set out to meet Neeson in person. When they arrive on the closed set, Peter tries to disguise himself as Mrs. Potato Head to draw him out without luck. He then tries to set up a confession booth, but gets caught and is arrested.

Peter gets bailed out by Neeson who decides to confront Peter on his challenge, Peter tries to throw a punch and fails, and is cowed when Neeson prepares to retaliate, promising to serve him in exchange for not getting beaten up. Peter fills in for assorted chores such as jury duty and his Twitter feed. Peter is sent to a gym to have a man pee his hands. The guys are unaware that Peter has gotten out of jail and when he returns, he tries to claim he won the fight. As Peter gets back to Liam, the guys follow and confront the pair, finding out that Peter lied. Liam rubs it in by calling him his houseboy and Peter finally has his fill. Peter's resistance results in their fighting, with Neeson wiping the floor with Peter. However, the guys are still impressed with Peter's completion of his challenge. 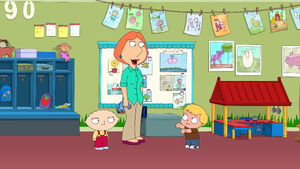 Meanwhile at Stewie's preschool, Lois is asked to be a classroom volunteer over Stewie's protests. When the teacher leaves Lois in charge, Landon gets to be Lois' helper and receives even more attention, which angers Stewie further who decides to get close to Landon's mom in return. Stewie falls down while pursing Landon's mom which results in receiving kisses on his booboo. As Stewie throws in the towel with Lois, he breaks down, but Lois reminds him that he'll be her favorite little boy and her volunteer week is over.

Retrieved from "https://familyguy.fandom.com/wiki/Fighting_Irish?oldid=217143"
Community content is available under CC-BY-SA unless otherwise noted.