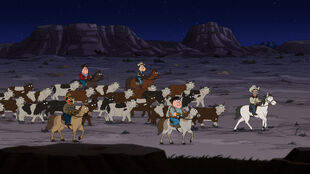 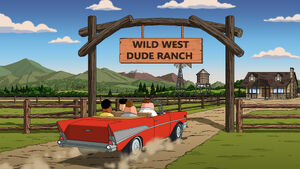 After a big neighborhood block party, the guys realize that their best years are slipping away when Mayor West suggests they find their strength again at his dude ranch. After advising them that they won't be on a vacation, and gives the guys cowboy hats and tells them that they represent a code of honor. They are paired up with their horses and cattle and set out, and West leaves them to drive the cattle back on their own. Overnight, they encounter a bear which most of them except Cleveland manage to distract with dummies. But when Peter discovers that he lost his cowboy hat, he becomes determined to get it back. They locate the bear but Peter is nearly mauled when the other guys help lasso it, bringing it under control. The bear turns out to be Mayor West in disguise saying that he came up with a test to help the guys find their manhood. 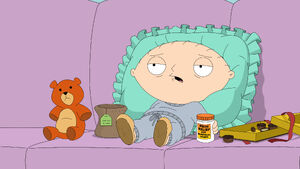 Meanwhile, Stewie finds a small amount of blood on his pants after a 'slip and slide' accident and believes he's gotten his period. Brian dismisses it is just a playground accident, and when Stewie finds that the bleeding has stopped, his internet research leads him to believe that it is spotting due to pregnancy. He mentions this to Brian who tries to drive home that it is impossible for him to get pregnant, but when he starts to cry, Brian decides to humor him and leaves him to start planning with Rupert. He eventually tells Brian that he took a morning after cocktail of children's vitamins to get rid of the baby, although Brian gets him to reveal that he actually went to the hospital for a sonogram and got yelled at, breaking his pregnancy fantasy.

Back home, Peter is glad to be off the horse having developed a serious chafing problem, while Lois heads out with Bonnie and Donna to a women's retreat on the ranch, but find their shopping cart 'round up' to be significantly inferior to the men's experience.