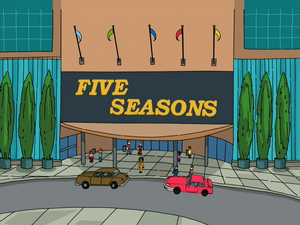 The Five Seasons is the hotel that Luke Perry stays at while in Quahog during his lawsuit against Meg for the story Peter wrote for her revealing Luke to be gay in "The Story on Page One". In order to try to get Meg out of the lawsuit by "catching" Luke in a gay act, Peter sneaks into the hotel with Brian and tries to seduce him without success. After the truth is revealed in the Griffin home and Meg writes a new article that claims Luke is really straight, Luke returns to his hotel room with Mayor Adam West in his bed who agrees to have sex with him if Luke will quit stealing his water as Luke slyly agrees, although he has no idea what Adam West means.

Retrieved from "https://familyguy.fandom.com/wiki/Five_Seasons?oldid=150030"
Community content is available under CC-BY-SA unless otherwise noted.