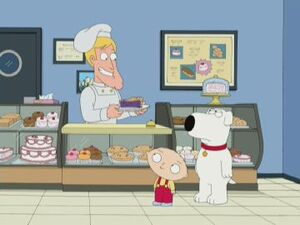 Fjurg Van Der Ploeg is a Swedish baker who owns Fjurg Van Der Ploeg's Swedish Bakery, and speaks with an accent, pronouncing many words, such as "pie" as "pee", "house" as "hoose", "water closet" as "waiter cloozit", and "dough" as "doo".

In "Ocean's Three and a Half", a boy who is presumably Fjurg's son, pronounces "father" as "faiter".

Fjurg is the Schpupel Champion and, in "Tales of a Third Grade Nothing", defeated Peter Griffin in a game.

Retrieved from "https://familyguy.fandom.com/wiki/Fjurg_Van_Der_Ploeg?oldid=224571"
Community content is available under CC-BY-SA unless otherwise noted.