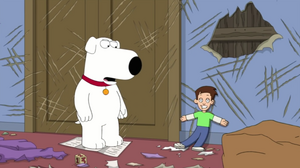 Flat Stanley is an American children's book series written by Jeff Brown. The book recounts the adventures of Stanley Lambchop after surviving being squashed flat while sleeping by a falling bulletin board. He survives and makes the best of being flat. An associated educational program involves students taking various paper Stanley's around the world to share their adventures.

In "Take a Letter", during Stewie's first day at the exclusive preschool Corridors, he notes that his class' version of "Flat Stanley" is really Stanley Tucci.

In "Baby Stewie", Brian finds Stewie's preschool's Flat Stanley behind a box beside the latter's time machine room as he hopes to revert Stewie to his normal self. Entering, he asks Stanley to wish him luck. As the time machine doors close, Stanley notes that he could simply call him by his given name instead of attaching the descriptive epithet.

Retrieved from "https://familyguy.fandom.com/wiki/Flat_Stanley?oldid=220200"
Community content is available under CC-BY-SA unless otherwise noted.