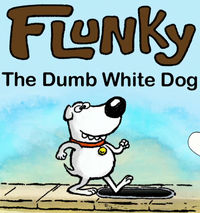 Flunky The Dumb White Dog is a parody of Brian featured in a series of children's books authored by "Griffin Stewart", the pen name of Stewie Griffin in "Movin’ In (Principal Shepherd’s Song)".

Initially Brian is shown the book by a mother in a pet store, and then when visiting Narren's Books, he sees many for sale along with a cut-out poster showing the catch phrase "HERF DERF!". He collects several different volumes of the series and demands that Stewie put a halt to their publication. When the latter refuses, he serves him with a lawsuit for defamation at Narren's during a book signing. However, Stewie wins the case when he proves that Brian is an idiot, but had already stopped the series by that time.

Retrieved from "https://familyguy.fandom.com/wiki/Flunky_The_Dumb_White_Dog?oldid=222870"
Community content is available under CC-BY-SA unless otherwise noted.