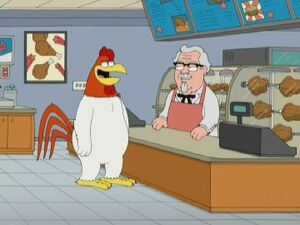 In "Back to the Woods" he walks into a Kentucky Fried Chicken restaurant and greets Colonel Sanders and comments on how good it smells in there. Sanders then decapitates him with a meat cleaver. His still-functioning head comments that his body looks just like a chicken with his head cut off. It is then when the head realizes what happened.

Foghorn was voiced by Seth MacFarlane.

Retrieved from "https://familyguy.fandom.com/wiki/Foghorn_Leghorn?oldid=214630"
Community content is available under CC-BY-SA unless otherwise noted.