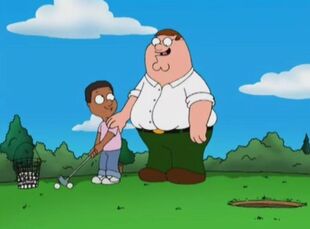 Peter with his "new" son

Fore Father
When Peter wants to prove he can be a good father, he takes care of hyperactive Cleveland Brown, Jr., prepping him to be a great golfer. 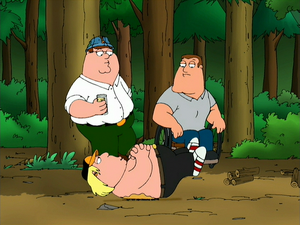 Peter and Chris accompany Joe, Kevin, Cleveland and Cleveland Jr. on a father-son camping trip. Joe's gung ho ways and his derisive remarks, coupled with Chris' inability to be responsible for the campsite, cause Peter to doubt his influence on Chris. Peter decides he has to teach Chris some responsibility.

Peter decides that the best way to teach Chris some responsibility is to get him a job as a gold ball shagger at the public golf course. Having done that, Peter believes himself to be the model father, prompting him to take Cleveland Jr. under his wing. Cleveland Jr. has such a natural athletic talent and a knack for golf that Peter showers attention on him, essentially forgetting about Chris.

Chris, feeling abandoned by Peter, begins to hand out with Quagmire, who tries to show him a good time. While they're at a strip club, Chris confides in one of the dancers, and she encourages him to give his dad another chance. Meanwhile, Peter and Cleveland Jr. decide to enter a "man-boy" golf tournament. But just when Cleveland Jr. is on the verge of winning, he loses focus. Cleveland tells peter that perhaps he's better off tending to his own son, which leads to a heartfelt (and deadly) reconciliation between Peter and Chris. 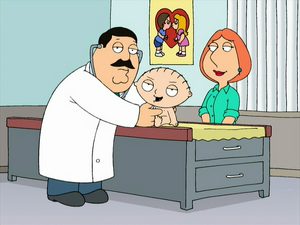 Meanwhile, Stewie goes to the pediatrician for his physical. He endures it quite well until he has to get his immunizations, at which point he regresses into being a terrified toddler.

After a while, Stewie gets a fever from the immunizations, which Brian convinces him was actually an injection of a mind control serum. Stewie's fears about what nefarious deed Lois is trying to perpetrate on him with these shots, combined with the fever result in a series of wild hallucinations.

Retrieved from "https://familyguy.fandom.com/wiki/Fore_Father?oldid=216417"
Community content is available under CC-BY-SA unless otherwise noted.